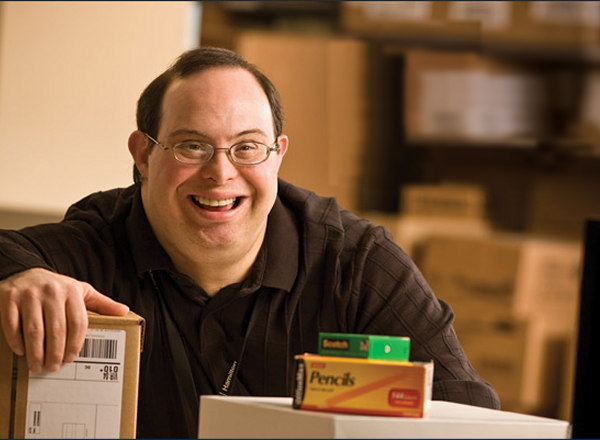 If you need something done, and fast, David Egan is your man—if you can catch him. A Distribution Clerk at global strategy and technology consulting firm Booz Allen Hamilton, David is continually on the move working to ensure employees at the company’s busy McLean, Virginia corporate headquarters receive their packages, mail and supplies on time and with a smile.

David, who has Down syndrome, began working at Booz Allen Hamilton about 14 years ago as a high school intern. When he first arrived, the company appointed someone to serve as his mentor while he learned the routines of his day-to-day responsibilities, an accommodation David feels was key to his early success. Also important was having a manager who clearly understood the functions of David’s job and what he needed to be successful. According to that manager, once David learned the ropes, he flourished.

Today, David is highly regarded by people at all levels of Booz Allen Hamilton for his strong work ethic and reliability. He has a strong organizational commitment, due in part to the support and career development opportunities the company has provided him over the years. “It’s not just getting a pay check,” David says. “It’s something very rewarding for me, something that I’ll hold on to, something that I’m proud of.”

Even off the clock, David doesn’t tend to slow down. He’s heavily involved in Special Olympics and has traveled throughout the U.S. and internationally with the organization, both as an athlete and ambassador. A passionate self-advocate, he is also active with the National Down Syndrome Society and the Down Syndrome Association of Northern Virginia. On March 2, 2011, David Egan testified during the U.S. Senate Committee on Health, Education, Labor, & Pensions (HELP) about improving employment opportunities for people with intellectual disabilities. Read his testimony: http://help.senate.gov/imo/media/doc/Egan.pdf.

For information about job accommodations for people with intellectual or cognitive impairment, see JAN’s A to Z of Disabilities. To see and read about other people with disabilities in their workplaces, return to JAN’s Homepage.